GO BACK TO HOME PAGE

The influence of Dante Alighieri reaches our days through fields as different as history, politics and literature, but at the same time so unified in the human being. The truth is that Dante “is a pop character“, as the organizer of the conference, Giovanni Collamati, says, and for this reason he is still relevant in national and international identity: “There are recent video games inspired by Dante’s Inferno, many writers throughout history and playwrights have been inspired by the world of Dante to situate their works or new reflections, so that, to some extent, Dante is a language”.

Last November the University CEU San Pablo hosted a seminar on the figure of Dante, organized by the Cultural Foundation Angel Herrera Oria. The professor of medieval history, Manuel Alejandro Rodríguez de la Peña, explained Dante’s idea of empire as a world jurisdiction. Alfonso Marini, from the Sapienza University of Rome, unveiled the traces of Francis of Assisi in his poetry. Francesco D’Angelo, from the same university, reflected on the 13th century considerations of a distant Norwegian king, and Eduardo Baura García, p.h.D in medieval history and professor of University CEU San Pablo, went back to the Middle Ages together with Professor Collamati, to contemplate monarchies through the eyes of Dante. 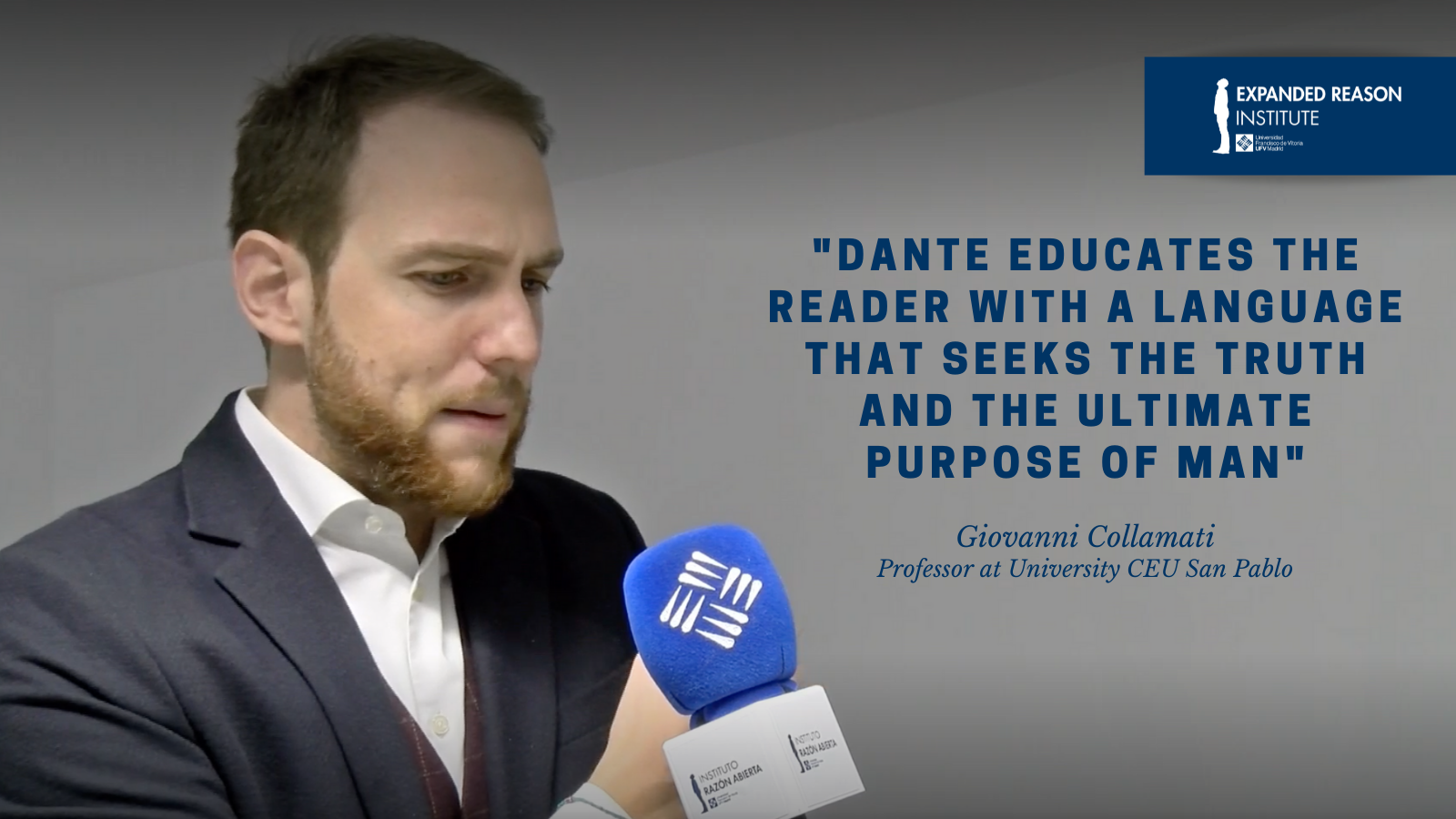 Giovanni Collamati argues that each tercet in Dante’s work is the cog in a much larger mechanism that guides the reader through the otherworldly world (hell, purgatory and paradise) and, at the same time, reveals the whole of Dante’s humanity as representative of an entire genre: the human race. By studying how Dante saw the powerful of his time, we can ask ourselves what we know of our time, of those who are now ruling the world. The image we have of them is filtered, so is Dante’s, and any verse of his calls us to know the world around us.

The search for truth

Odysseus is a particular character: he is in hell, he goes against the gods because he is proud, but at the same time what moves him is the search for truth. Dante is a man who is always asking himself throughout his work when sin begins and how far humanity goes. He doesn’t think that everything he does is automatically evil, but he likes to wonder about the limit and how far a man can go in the search for truth. And what is clear is that he must direct that search to what really matters: the epistemological question.

Dante’s entire work is oriented in one direction: he begins in hell and cleanses himself in purgatory and then arrives in paradise. In such a way that when he is in front of the Virgin, who thanks to her has the permission to look at the Trinity, the privilege is to look as a human being. Only by passing through the three parts of the ultraterrestrial world could he reach the full vision of the truth. On the one hand, there is the inner impulse of man to seek knowledge, but one must also know how to refine it, and Dante directs it to the last canto of paradise: the contemplation of the Trinity.

The broadness of the horizon through literary symbols

What is interesting is that The Divine Comedy is a work for everyone, anyone can read it: “You can easily find the latest gossip of the moment in Florence when Dante was young or the little problems of the neighborhood, someone who disliked him particularly badly was given a little satisfaction by putting him in hell with the damned, but at the same time you find great theological disputes with problems of the time, Trinitarian type or with the Thomistic or Aristotelian currents of thought; it is all united and perfectly organized in this work, it educates you as a reader”.

He explains that hell is a simple part to read that an average man of that time can access and little by little notions are given, changing the language, until the content is elevated. In the end, paradise ends with the love that moves the world, which is God. That is to say, it starts from the lowest, literally below the earth, and ends up looking at the stars, which are higher.

The dialogue of science with theology and philosophy

Giovanni Collamati comments that “it is extremely easy because everything allows you to dialogue with philosophy and theology”. And he adds: “Any field of knowledge has to do with man, the man who thinks, the man who learns, and automatically this is already philosophy. If man then realizes that he is not alone, he can also open himself to theology”.

It is important to always leave a part of mystery open: “We live in a culture, a civilization, where doubt in general is given great importance, a legacy of the most modern age, and we have received the idea, which I personally do not fully share, that encourages the teacher to raise doubts, but I believe that there must also be answers, which do not have to be complete, but it is necessary to demonstrate that one has enough courage to have them and, at the same time, it is essential to always leave a little mystery so that the work that remains to be done can be done by the students. The worst thing that can happen is for a student to say to you: “So, what am I supposed to think? No! He obviously didn’t understand me. The goal is for him to reflect, so you always have to leave a bit of mystery, so that he can wonder and find there what I think is there and that he could also discover”.

Wonder is what is looked for in all university audiences, but the ability to be surprised is lacking. In a world where surprise is very difficult because we have everything at our disposal, how many of us can be amazed when we discover a living being like a lion, for example? It is necessary to seek amazement, to give students the ability to be surprised by the world around them, to really discover it, not just because they have seen it: seeing does not mean knowing.

The Dante Alighieri conferences are part of the path that every student can take within the university, whose mission is to guide and accompany them on the path of the search for truth.

GO BACK TO HOME PAGE