THE QUESTION OF BEING IN PALLIATIVE CARE

The philologist and professor at the University of Navarra, Alicia Hernando, has published an interesting article on the importance of palliative care in a society in need of answers in the last stage of life. And she does so by the hand of great authors such as Tolkien, Lewis, Golding or Frankl with whom she goes through their main plot lines in parallel to the human narrative itself that searches, suffers and wonders.

It is precisely on this review that she is currently deepening her research for her doctoral thesis:

The medical specialty, explains Alicia Hernando, should not only be reduced to a treatment, but, thanks to a whole interdisciplinary team involving doctors, nurses and other staff, has to put in place a more lasting accompaniment, extensive to the families, since with the patient also suffer their loved ones and need other health specialties such as psychological.

In this sense, the British nurse Cicely Saunders is a fundamental pillar on which to rely, given the valuable learning derived from her work in that hospice for terminally ill patients whom she accompanied until their natural death: “Cicely tells us that it is necessary to take care to cover a suffering that is total, not just physical pain, but spiritual and existential. The medicine that proposes palliative care alleviates other aspects and that is where these important values come into play”. He goes on to comment that “sometimes this implies a deep psychological accompaniment, other times it is just being there, keeping silent and letting the patient open up to resolve the conflicts that go behind and make him suffer in another way. We think of ALS or terminal cancer, but there are other aspects to cure, the person also suffers because he feels a burden, or because economically he has to face a series of situations, or he believes that there are conflicts that he has not been able to resolve previously…, that is to say, the end of life is not only medical suffering, but a whole set”.

Lecture by David Clark on “Cicely Saunders: Her Life, Her Work, and Her Legacy”

Alicia Hernando argues that the integral vision of man in all his dimensions raises the question of whether the palliative-euthanasia binomial is real: “The debate has become polarized and it is essential to break it down; they play with semantics, with euphemisms: is it a law that helps people to die, is there a real provision of aid? These are terms that permeate society with a purpose that is absorbed in a concrete way, although I would not go into this debate so much as into how to make palliative care better known, which in itself is very good.

The intention in any case is to alleviate suffering until the last moment. The euthanasia law justifies death by arguing that a point is reached at which no more can be done and that in that critical situation it is justifiable to die, but Alicia Hernando insists that this is misunderstood: “At that critical point the treatment ends, but not the cure, you can relieve pain in different ways, and palliative care seeks to heal in the deep sense of the term, not only physically, but in an existential and spiritual perspective, which is what society has not yet come to discover, in fact, I do not know anyone who knows what palliative care is and does not see it as something very good,” she confesses.

He gives the example of a doctor who treated a woman with refractory suffering who asked him for euthanasia, but they entered into a dialogue of understanding in which he understood that she was exhausted and could no longer cope, and in response he made a proposal: “well, we have already talked about what we have not, now let’s talk about what we have, what palliative care can do for you”, to which the patient replied: “I’ll give you two days”. In the end, the woman took on a very good palliative sedation experience that had a great echo in the family. In short, she considers that if palliative care were truly known there would be no way of saying no to it: “Of course there are limits, but we have to make it known what it is and distinguish it from what we get through the media; people do not know what it entails because of a manipulation of language”.

In this line of commitment to the dialogue between science and man, Alicia Hernando finds many reasonable arguments for broadening the academic horizon from the Medical Schools themselves: “In every curriculum it is necessary to delve into the subject of palliative medicine, it is essential that the students’ reflections touch on the question of being, that the medical intention to cure in all aspects is propagated, we must continue to fight so that advanced medicine can reach all universities”.

Faced with the paradox that in one operating room a life is being saved and in the opposite operating room another life may be being taken away, we are presented with a complex panorama: “Our Portuguese neighbors have already passed the euthanasia law and in other countries they are looking at the possibility of opening up these realities beyond refractory suffering, at this point training is key and it is necessary to form a team, to draw on the experience of all, because in a team the decisions are different,” he concludes. 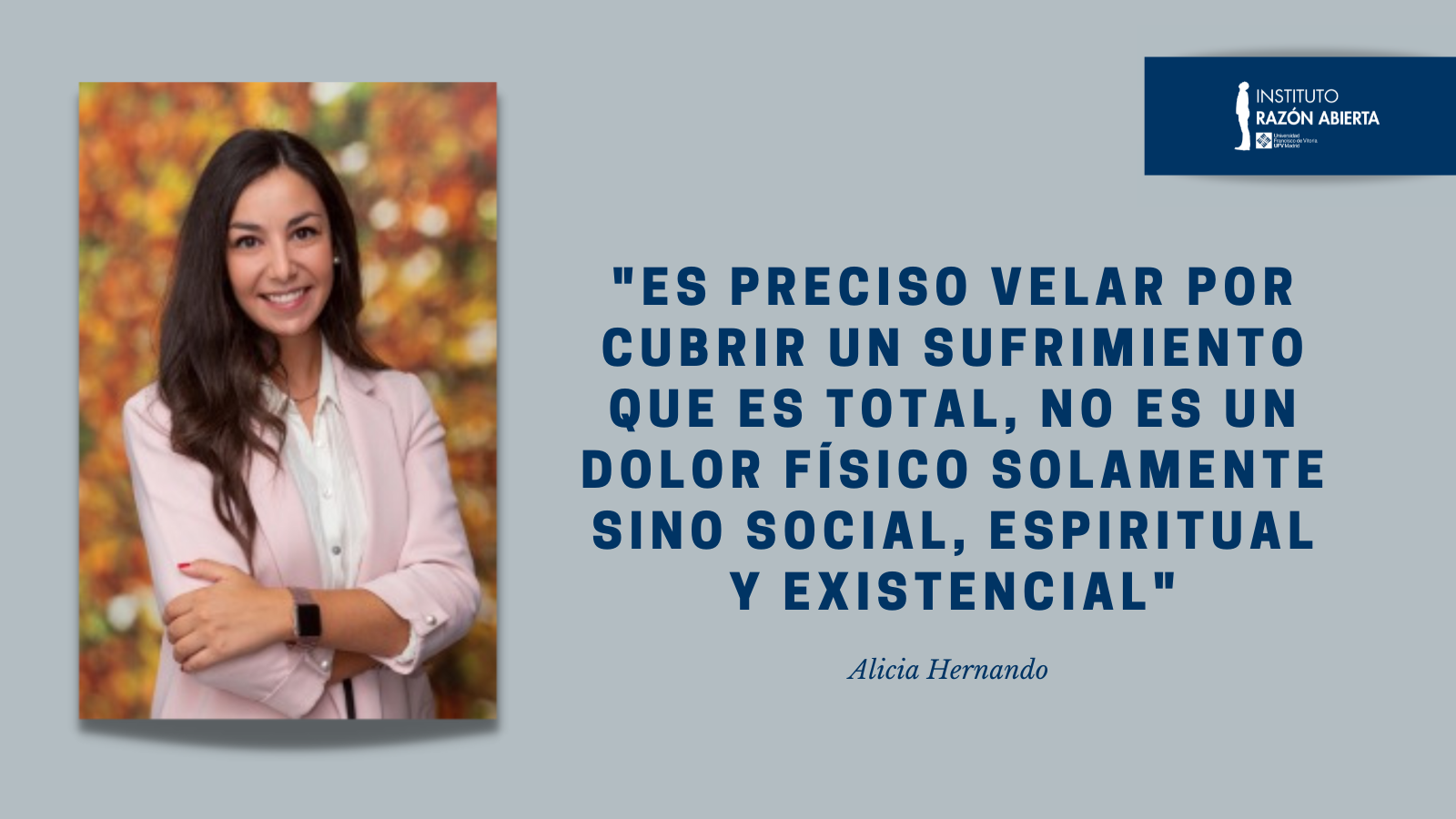 In this line of commitment to dialogue between science and mankind, Alicia Hernando finds many reasonable arguments for broadening the academic horizon from the medical faculties themselves: “In all curricula it is necessary to deepen the subject of palliative medicine, it is essential that students’ reflections touch on the question of being, that the medical intention to heal in all aspects is spread, we must continue to insist that advanced medicine can reach all universities”.

Faced with the paradox that in one operating theatre a life is being saved while in another room another life may be being taken away, we are presented with a complex panorama: “Our Portuguese neighbours have already approved the law on euthanasia and in other countries they are looking at the possibility of opening up these realities beyond refractory suffering. Faced with this panorama, training in palliative care becomes even more relevant, if possible, and the different disciplines contribute to caring for the person in their human complexity,” he concludes.