Classical music has endured through the centuries because of its role as a bridge between generations. It was Chesterton who wrote that tradition is the democracy of the dead, and this is how this musical genre penetrates the horizon of human knowledge up to the present university.

The Director of Teatro de La Zarzuela, Guillermo García Calvo, feels privileged to be able to look at the works of history’s great musicians, and continues to be surprised that the planet is not devoted to classical music. He jokes that this fantastic activity is a secret so that there are not too many of them. 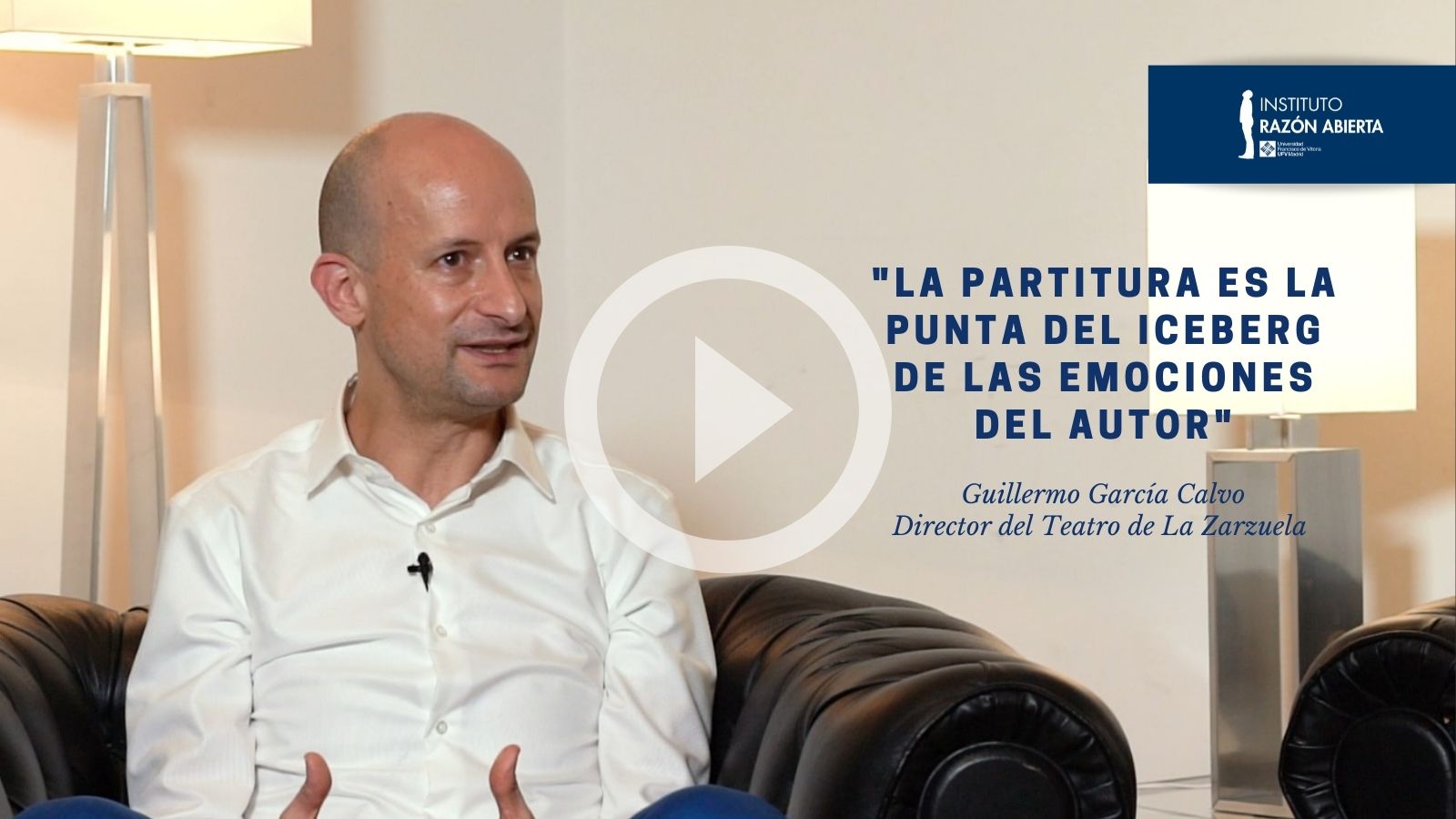 Interview conducted by the Instituto Razón Abierta, in collaboration with the production company Logosfera of the Mirada 21 group

Vocation as a leader

Guillermo’s story begins at the age of 7 in front of a piano. Since then he has conducted orchestras in such important places as London, Berlin, Florence and in Spain in several cities. He has reached this level of his professional career with the Opera XXI Award for best musical direction and with a humanistic education that comes from the pure pleasure of studying. His parents enrolled him in a small music studio in Madrid and without any pretensions or objectives, just for mere enjoyment and curiosity, he became who he is today. He has always been interested in everything related to humanism and letters, at home he read a lot and loved going to Mass for what was spectacular about it, he feels that perhaps this enjoyment has a hedonistic touch, but that is how he got to conducting, not for the power or recognition, but for the operatic repertoire that he did not have in any other instrument.

“My rise in music was very natural and unforced, I was not aware and still am not aware of the power that comes with it”.

On his journey he has been accompanied by important teachers with whom he has learned to think. The most decisive was his teacher Almudena Cano, now deceased, who encouraged him to leave Spain and study in Vienna. He considers her to have been a “visionary” who believed in his talent and encouraged him to leave the piano as a concert instrument, opening up new horizons for him abroad. He regrets that he has not been able to see the fruits of her teaching. He has lived in Vienna since 1997, his wife is Austrian and his two children are Viennese, so he combines the two cultures and the two languages.

The university mission of Razón Abierta in its quest for the unity of knowledge leads him to speak of the integration of the orchestra as a whole. He sees the orchestra as a reflection of society and the human need to form a community. The soloist is the exception. And as a conductor, he seeks to coordinate the group as if he could push a button and create a harmony. Even when doing opera, zarzuela or ballet, where the stage and technical equipment come into play, the art is even more total.  He connects with childhood and enjoys being in the front row, expressing that “to be a director is also to be a spectator”.

He confesses that he is still amazed every day when he listens to the orchestra. In fact, he has been working for a month on a very complex production, The Magic Opal, and although he lives the moment beforehand with a lot of nerves, wondering why he is there or why he has to do that, when it starts to work, he lives it as a magical moment. Every day he renews his passion, every time he conducts the orchestra, and he considers it a great good fortune because every production is different.

“If I didn’t live music with such passion, in such an enriching way, I wouldn’t be a conductor any more.

For Guillermo García, the philosopher López Quintás, who connects classical music with the roots of man, is an inspiration. “In music, achieving beauty is something that has no end”, working on sound, tuning, homogeneity, musical phrase, emotional expression… are challenges, and there is no other activity in the world that requires so much sacrifice, but at the same time allows us to optimise so much, because there will never be a definitive version: “We will never reach perfection, that’s the beauty of art, to be able to try”.

The relationship with beauty is his daily motivation, because deep down he is always searching for it: not only as a question of balance sheets, but also from a moving perspective, to reach the public with a beauty without words, from the sincerity of emotions. It is about connecting with the emotion that the composer felt when writing that music and being able to transmit it to the audience with sound.

As part of the university’s educational project, which consists of awakening to questions, discovering the truth and deciding what changes to make in life, the conductor enjoys, above all, the moment in which there are no more words and he only connects with body language and the gaze.

“At the concert I stop being myself and enter a meditative state, I merge with the musical moment and I am receptive to opening the door to another dimension.

His life is not without a certain complexity, having a family in another country and working in two other countries apart from Spain: “The moment of making music is something therapeutic, a balm for me, I feel happier and more optimistic afterwards”.

As an orchestra teacher, he is pedagogical and didactic, he likes to capture the group’s state of concentration and is concrete and punctual in the directives he gives them. He believes that it is important to hit the right key to get everyone involved, and to this end he uses a number of metaphors. For example, Strauss’ Salome always sounds very loud, but he wanted to make the group see that in the original libretto she is a young teenager and he managed to make the orchestra sound lighter and lighter, getting emotionally involved: “I find the way to seduce the orchestra if I ask myself the right questions beforehand”.

Precisely, he reveals that the questions come with the study of an abstract score that has no literary text behind it. Then he sits down at the piano and asks himself what the composer wants: “The score is a tip of the composer’s emotional iceberg, I go backwards to find out what he felt and what it means, translate it and then explain it to the orchestra”.