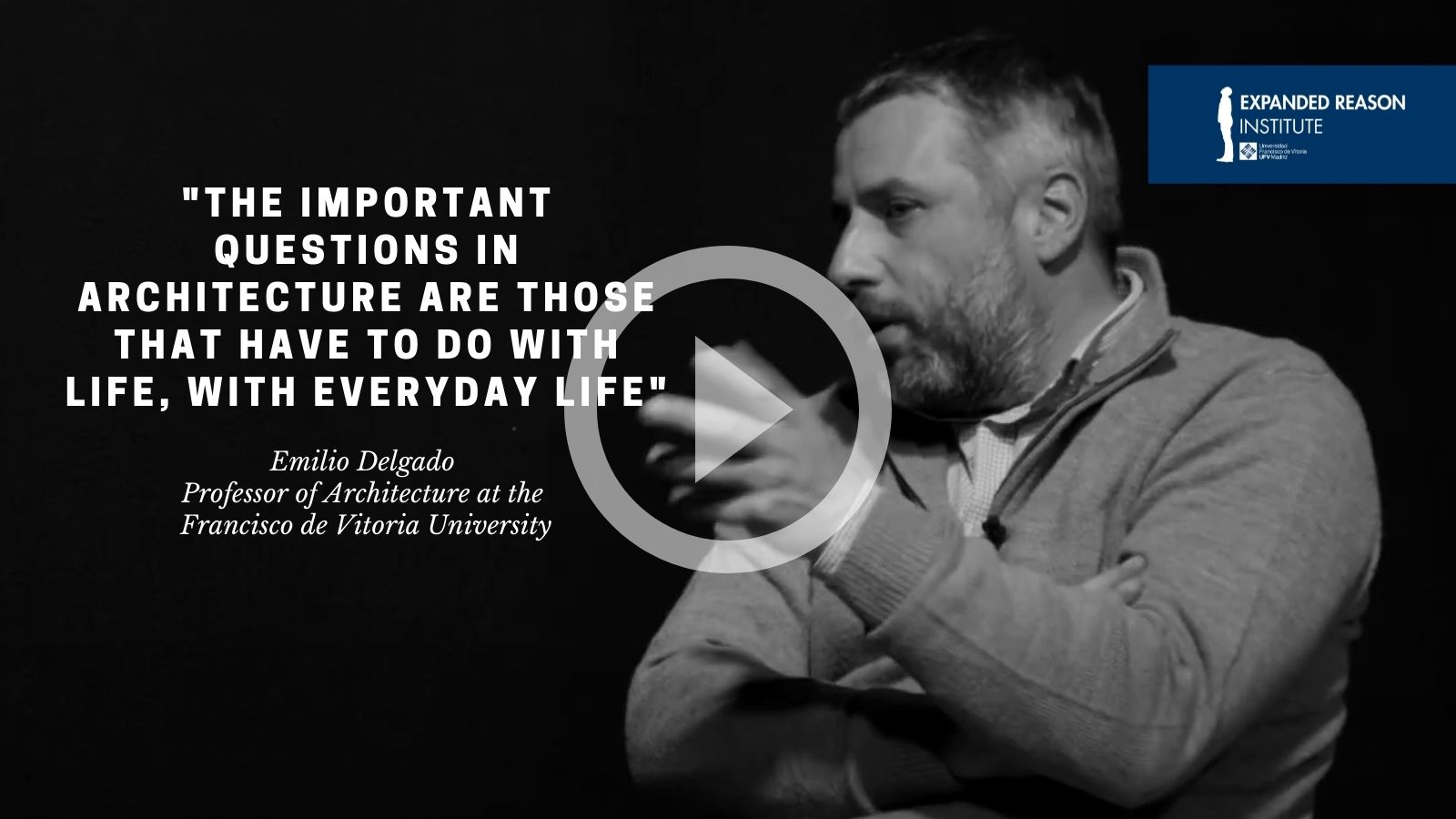 [Transcript of the interview]

-Today we are going to talk about a discipline that is part of the structure and the way we organise our lives, which is Architecture, and we have with us Emilio Delgado, Vice-Dean of Research at the Polytechnic School, and it is a real pleasure to have him on the set of the Faculty of Communication. Hello Emilio, how are you?

-Thank you very much for having this meeting with us. We wanted to ask you how you combine the two perspectives of Architecture. On the one hand, a slightly more technical part, the characteristics in the way a building or property is constructed. And, on the other hand, the part in which you think about whether the person who is going to live in that space is going to have a full life, how to give meaning to the life of the human being who will live in that building? I suppose that these two parts are not entirely inseparable, is there a point of union, how do you experience it in the exercise of your profession?

It is a very good question and it is a question that I think we architects have been asking ourselves for a long time. It is curious because, on many occasions, we make buildings and projects for people who do not have a specific charge, they are citizens, when we make a museum, a supermarket, when we design social housing. It is clear to us that people are going to live there, but we often don’t have them as identified or valued when we do an institutional commission as when the commission is personal or private.

In the end, we have to stop treating man as a generic being and discern the complexity of the person who is going to inhabit the space. One thing happens and that is that thinking about a building is a very complex thing because in the end it lasts a long time, longer than the people who inhabit it at a given moment. It is difficult to cope with the contingency of the current inhabitant when the building easily lasts 50 years, in the best of cases 100, and we have evidence of buildings that have lasted several centuries. We are faced with a situation that is certainly complex because of the persistence of architecture over time.

-There is an architect you probably know, Etsuro Sotoo, the Japanese architect who is finishing the project for the Sagrada Familia in Barcelona, who thinks that we have become “badly accustomed” to our Christian roots simply because we take them for granted, what meaning do you find in what Etsuro thinks, what relationship does Christianity have with European culture in the world of Architecture?

Christianity says one thing that is fascinating in relation to Architecture and that is the way in which it was able to grasp, from its beginnings and coming from a Jewish culture, the value of the transcendent and symbolic embodied in matter and that has given rise to a very particular type of art. On the one hand, it has been able to capture the face of Christ, a marvel in the development of Christian art, since it somehow understands the importance of incarnating the face in matter through artistic representation. And, on the other hand, it is fantastic how he tries to make this incarnation evident in the construction of spaces and places that are also capable of representing the longing and hope for a future world. Even in cities, because Western culture with these roots is somewhat aspirational: the city becomes a longing not only for the present, not only for our surroundings and activities, but also for the future, something related to the city in the eschatological realm, the heavenly Jerusalem.

It is curious because on many occasions, as we are seeing today, when we put in crisis the entity of the city and what has to do with it, the region, the nation, we see that this shakes our culture and supports, and our references disappear. We live linked to the city in a very special way.

-Do you have an architect who has inspired you, who has influenced the way you work?

Man, I have a master who is a reference for me, Alberto Campo Baeza, who we met here at the house. I had the opportunity to work with him for 10 years and he built the sports centre here on campus, but I have also participated in the development of works and projects with him. For me he is a point of reference for the way in which the architect puts his all into providing the best possible setting for the people who are going to live in it.

-As a teacher you are also constantly at play, in that way that teaching leads students to ask themselves questions that may perhaps start from something technical or quantitative and move on to a question that has more to do with an anthropology of man, an epistemological question related to truth or an ethical sense, that is, the four questions that mark the Expanded Reason course. Do you have any specific example of your students that you can pass on about a subject that they have started from one point and arrived at another?

The basis of teaching, not only in Architecture, but in any science, must be learning to formulate questions: learning to identify them, on the one hand, and to verbalise and confront them, on the other. Knowledge, although we may think it is unlimited in terms of the number of questions we can learn, in itself has its limits. By going deeper into a subject we can go deeper into what we want to know, but over time, as I am experiencing and discovering personally, there are a series of underlying questions, which have to do with the Expanded Reasoning proposal, that amplify more and better the way in which we face the response that we professionals should be expected to give in the present and in the future.

We experience this when we try to put into focus not a technical question, but a question of an experiential nature that has to do with life, the place in which we are immersed. Sometimes we try to theorise and abstract things a lot in the teaching and professional sphere, but in the end the issues we deal with are very day-to-day, very everyday.  In this sense, with the students, for example, in the first year, we have a subject on creativity and we try to put before them questions related to the meaning of their profession. There is a very typical question we ask every year: What is Architecture? If you think about it and reflect on it, you realise that you put something at the centre of your science in order to be able to define it, understand it and express it more intensely, and if you are then going to be able to champion that definition throughout your life. It is always limiting, but it gives you a direction and maybe then it changes or is modified.

-What do they put at the centre?

When one enters the career at the beginning one usually chooses technique, others put art understood as pure creativity, or even the architect, which is a mess because the designer himself is put at the centre, others choose beauty, the inhabitant, the function or use to which the building is destined… it is a complex and beautiful exercise.

-If you could wish what the architect of tomorrow should be like, what is your image of that integral architect who puts the right thing at the centre?

-Besides, you have more experience and you can glimpse where there is no mistake in what you put in the centre, while the students are still learning, but with a few years behind you you can say something about the vision of Architecture and what to put in the centre…

I answer you with a reflection and then an example. When I think about what legitimises me as an architect, it is something very beautiful and it is all the architects who have been behind me. It gives me a lot of calm. If it were up to us alone we would be lost. When one thinks that we are small continuators, little dwarfs who stand on the shoulders of the giants of the great architects who have existed for centuries and also recently, one is very calm to be a continuator of this noble tradition. That is what I think about the architects of tomorrow, that they continue to be aware of and participate in this beautiful journey. Just as it gives me peace of mind, it will give it to those of the future.

As an example, I like the Pritzker Architecture Prize, which is like the Nobel Prize and was awarded yesterday to an architect called Francis Kéré from Burkina Faso, in Africa. When he was young, his parents realised that the best training he could have was not there but in Europe, and he went to England and Berlin, where he spent his teaching career and part of his professional career. I say “part” because for some time now he has been working in Burkina Faso. He has understood that his work does not lie in the possibilities that a life in the West can give you, but in becoming aware of returning to what has been given to you. It is curious because an award has been given to a type of architecture that is absolutely vernacular, very much rooted in the place, small schools and cultural centres that, seen from a European perspective, has nothing to do with high tech, new technologies or energy saving. There is sustainability because that is where the more local architecture begins, but it has given us a kind of “slap in the face” to the architects of the big cities. It is as if he were saying to us: look at what you have around you, see how it can inspire you, pay attention to the problems that are close to you because you need to be there to provide a service.

-The talents you have are to put them to use….

This architect seems to me to be exemplary, this way of going back to your origins and giving everything.

-Well, let’s learn from this great example. Thank you Emilio Delgado for being at the Instituto Razón Abierta and for broadening the horizons of that reason in a very hopeful journey. Thank you. See you later.