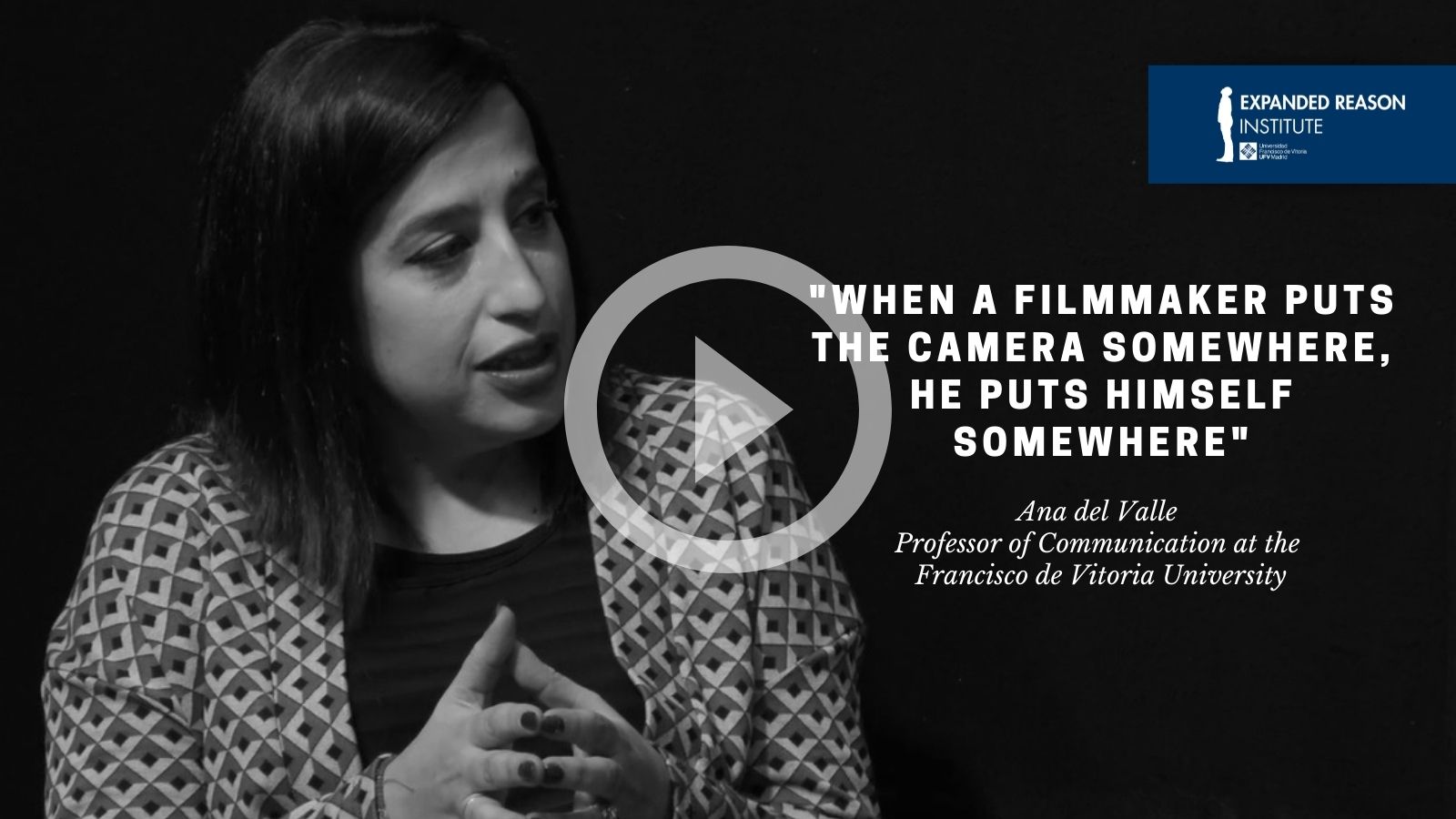 [Transcript of the interview]

-Welcome to Expanded Questions, the space of the Expanded Reason Institute where we are interested in science and, above all, in what science has to say about human beings. Today we have with us Ana del Valle, professor and doctor of the Faculty of Communication. Hello Ana, how are you?

Hello, how are you Almudena?

-Welcome. It’s a pleasure to have you with us today, above all because we’ve echoed one of the most interesting articles we’ve collected from your career, which is called… a very attractive title… anthropological and ethical answers to the technological question. And in this article, what we have looked at is how in this communicative act there is an intention, a way of placing the camera, of framing, the place you choose… in this communicative act, what is the underlying vision of man and what is the end, which is the question that interests us all?

It is the question. In this article, what we try to explore is the hypothesis that when a filmmaker puts a camera somewhere, what he puts is himself, he doesn’t put a technological response, but he puts a system of values, a certain view of reality. The article inherits a tradition that investigates the act of communication as a specifically human act and, therefore, as any human act, endowed with will and freedom, unlike other things that man does. Communication is a specifically human act and we understand that the film or audiovisual story is a type of communicative act and this has its own aims, which are understanding, comprehension and collaboration.

In this sense, all this is the legacy of the work of Expanded Reason that other authors have done before me, especially Álvaro Abellán in the dialogic theory of communication. What I was wondering there is if this is so, then is it possible that a filmmaker, a director, of all the decisions he has to make, in terms of lighting, sound, direction of actors, etc., there are some decisions that are more likely to create meaning, and I realise that there are two fundamentally: one is where he places the camera, because by placing the camera you select a part of reality and leave out other things, we tell the spectator “this is the most truthful thing I can find”, and another expressive substance is the montage.

To the question about the anthropological perspective, the answer is that as this question does not respond to anything technological (I can put the camera anywhere, but I have chosen this place because I want to tell this part of reality), I can trace the director’s view of the world, his idea of reality through the shots and the audiovisual language he uses. So, there is a certain vision of man in each style, in each movement and, in the end, in each director.

-How did you manage to look at this science in this way? How did you arrive at this forma-mentis, as they say?

It is not easy for me to understand another forma-mentis. I have always looked at science in this way. It seemed to me, when I started teaching the subject of Multimedia Philology, with which I began to teach, there were things that immediately caught my attention, and it was a subject that I inherited and it was well taught, but there was something that didn’t fit with me, and at that time I called it warnings. I said how is it possible to call this university teaching if it is constantly changing, and if it is constantly changing, how can we tell students that their mission is to seek the truth, if the truth is immutable, what truth is there in this? Or why do we work with technologies that are different from the way the human eye perceives, from the way the human ear listens, why are we so obsessed with resolution and not with meaning?

There were many questions from the beginning, which were not proper to the subject, which I was worried about having because I thought I was not able to focus on my subject, and which, nevertheless, are the ones that have led me to open up a new look at multimedia technology. In other words, I think that, from the beginning, I haven’t looked at it in any other way.

-Also, in this search that you propose, there are models that have inspired you a lot, for example, what do you find in a character like Hitchcock? What inspires you to take to the classroom?

I did my doctoral thesis on Hitchcock and I chose him for many reasons. Apart from these garments of love, much of my personal interest is that Hitchcock runs through the history of cinema. The history of cinema is not that long. Hitchcock has been making films since 1927 and finished making them in 1976. In that time cinema has gone through the emergence of colour, sound, 3D, television, and Hitchcock has always been an innovator. I was interested, on the one hand, in how he saw all these technologies, but, above all, that there was a fracture in his cinema that was not perceived.

When you organise his work, you usually organise it around the films he made in England and the films he made later in the US studios. But I realised that there was something that happened around the 1960s that completely changed his cinematic style and that one could interpret that there was a style of unity according to how the media were used to produce a language and then from that year onwards there was another style that I called a “style of fragmentation”.

I realised that what had happened is a personal, contextual situation that has to do with many things. The world changes, not only Hitchcock changes, and a series of things happen to him that he perceives in a certain way that makes him change his idea of cinema. He stops thinking of film as a way of seeking the truth and starts to talk about film as a way of manipulating. It’s a radically different conception, not only of cinema, but of the world, and that can be traced through the way he uses the media, being also a master in the world of technology. Later I discovered many other things, but that was the anchor.

-It’s impressive that the whole thesis has developed from there, this figure has given you a lot of academic ground. We also wanted to propose to you… Expanded Reason sometimes runs the risk of remaining abstract, how can this mission of exploring all the dimensions of the human being be made concrete, how can it be put into practice? For example, in your case, in your class, with your students, do you have any concrete case in which between teacher and student something technical has gone beyond and has generated a question that can open up to a global dimension or to a greater meaning? Something that brings the concept down…

In the subjects I have been teaching for the longest time, I do see an evolution in the students’ perception of the impact of this different view of science. For many years now, I have seen that many of these questions have arisen as a result of very concrete things. Many times, for example, since you were asking about specific cases, we are explaining what light is, an electromagnetic wave, oh well, and what are waves? Physically they cannot be seen, but they are perceived through their effects. Beyond the fact that they are, there are other things that we don’t see and we can account for them by the effects that we perceive in reality, in fact, they are real, even if you don’t see them. The visible part of the waves is light, however, this is not only a part of the electromagnetic spectrum because when we are illuminated it is through artificial light. We know that there is another one that is natural and, by analogy, one ends up asking questions about it.

In my subject, these questions are not cut off. They arise because when a person wonders what light is, they don’t want to know that it is an electromagnetic wave that has a wave frequency and a wave amplitude, that’s true, it must be said, but it doesn’t settle the question.

-It is also interesting to see how in your life, on a personal and professional level as a teacher, this view transforms you. What does an expanded reason or an integrating perspective mean in your life?

I find it hard to separate it. In the end, you are who you are and you have a vocation that challenges all aspects of your life. To look at science in this way is to look at your teaching and your personal sphere in this way. This journey has transformed me in some very concrete ways that are not only scientific. For example, not to narrow down questions, not to try to answer them only in one area of life, because no important question can be answered only in one part of your life. I take this approach to all questions, it also challenges me personally, not to stop asking myself questions because I think I won’t find the answer or because I think the answer is somewhere else.

It also leads me to a very deep respect for academic rigour and the research method because asking serious questions requires a dedication to the discipline, a knowledge and an epistemological question that I also try to apply to other moments in my life. It also means not being afraid to go into places that do not belong to the subject or are thought to be for others. And then, from having looked at Hitchcock in this way (I don’t know if he was in the question) I also take with me a sense of community and gratitude. He, after all he did, didn’t receive any Oscars and yet he is the director of the greatest film in the history of cinema. He is given the typical honorary award at the end of his life and he receives it with this phrase that I will keep for my life: “I share my award, as I have my life with her”, I share this award with my wife with whom I have also shared my life. To live like this, to be able to understand that the awards, the heartaches are the fruit of a community. Also in these questions of Expanded Reason, to live in peace, that where one does not arrive, the community arrives, the other arrives.

-It is a pleasure to hear how fondly you speak of your discipline, you respect it a lot, it shows, and for us it is a small satisfaction to be able to transmit that any science is very valuable, given the risk that the scientist might feel left out by the fact of incorporating the humanities, we want to give prominence to what science has to say, but also with this broad perspective of all the horizons of mankind. Ana, thank you very much, it was a pleasure to have counted on you. See you soon.